The Reason for the Season – Paula Black 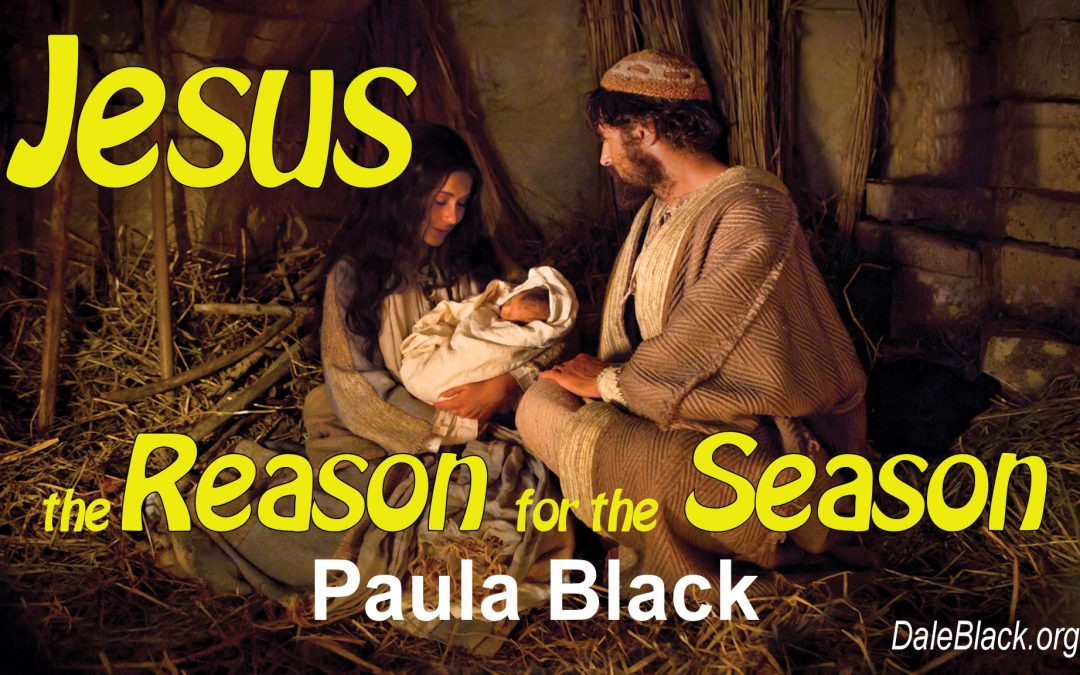 “Jesus is the Reason for the Season.” We find this slogan on decorations, in Christmas cards, and on bumper stickers. But what makes this famous saying so much more than holiday cliché?

Sometimes we seem to get so lost in holiday traditions, and even religious imagery, that we forget we are celebrating the arrival of a real baby. God, Himself—who came in the flesh to the world… to save mankind.

There are over 450 prophecies about Jesus in the Old Testament and over 300 in the New. His arrival to earth was a highly publicized event, if you read Scripture. And the prophets of old continually proclaimed His first arrival… as well as His second. There was, and is, no greater announcement to be made than that Jesus was coming—and is coming again!

When it comes to the “Christmas prophecy,” it’s the birth of Jesus in Bethlehem that we’re talking about. That’s the first advent (or arrival) of God’s Messiah. But the first advent of Christ only sets the stage and infinitely raises the stakes on the importance of the second advent of Jesus.

What do I mean by the “first and second Advent of Christ”?

The meaning of the word advent is: the arrival of a notable person, thing, or event.

For example, we say the advent of the space age, or the advent of the computer. It’s referencing the arrival of something or someone that changes things significantly. Well, the first and second advent of Jesus Christ absolutely changes everything… forever.

Jesus came the first time to offer salvation from the penalty of sin. To offer eternal life to all who would believe on Him and confess Him as their Lord (Romans 10:10). He will return a second time, just as literally as He did the first time. The second time He will come as King of kings and Lord of lords, to rule the earth and rule all the people who have been counted as righteous through their trust in Jesus.

His second arrival will be a completion of the work Jesus began at His first arrival. Even our salvation is not completed until our earthly life of faith in Jesus is over—whether through death or rapture

Consider Hebrews 9:26-28 AMP. The parenthesis and emphasis are mine for clarity. “…He has appeared (born in the flesh) and been publicly manifested to put away sin by the sacrifice of Himself (dying on the cross). And just as it is appointed and destined for all men to die once and after this [comes certain] judgment, so Christ, having been offered once and once for all to bear [as a burden] the sins of many; will appear a second time [when he returns to earth], not to deal with sin, but to bring salvation to those who are eagerly and confidently waiting for Him.” Hebrews 9:26-28.

The first coming of Christ is when He began the work of drawing sinners to Himself and paying the complete sacrifice for sin. His second coming will be the completion of the work of salvation and delivering those who believe in Him into everlasting life.

Let’s break from the Christmas norm just a little and spend some time looking at some Scripture Jesus read, which prophesied both Advents. Take a look at the first 2 verses of Isaiah 61.

This chapter is known as the Year of the Lord’s Favor and it’s a prophecy of what has been… and what’s to come.

Jesus launched his public ministry by rolling out a copy of the Isaiah scroll to a specific verse and citing Isaiah publicly in the synagogue. You can find that event recorded in Luke 4:16-19.

You’ll notice that He stopped His reading just before the part in that second verse that states, “the day of the Lord’s vengeance.” He didn’t even finish the sentence in the Isaiah scroll. He stopped short, rolled it up, handed it back to the attendant, and then he sat down (Luke 4:20).

Did Jesus take that Scripture out of context by leaving something out? Not at all.

Because his first arrival was to fulfill the first part of that prophecy: “to proclaim good news, restore sight to the blind, set captives free, and to declare the year of the Lord’s favor.”

Let’s tie two Isaiah prophecies together. Isaiah 53 is a prophecy describing the coming of One who would save and deliver. Describing the life of Jesus and what He would endure for you and me. In verse 4 and 5 we read of the benefits He would provide to whoever believed. This was a foretelling of Jesus Christ’s first coming (or first Advent) and what He would accomplish. It cannot be stressed enough that everything that was foretold in chapter 53 of Isaiah has been fulfilled.

Then in Isaiah 61:1-2 is the proclamation of Christ’s earthly ministry to all people. First prophetically through Isaiah, then by Jesus Himself.

Jesus stood in that synagogue in Nazareth and began his public ministry on Earth by proclaiming and fulfilling Isaiah’s prophecy. He was making a public announcement that the Messiah had arrived. God’s favor had just been declared upon mankind through Jesus. That’s the good news proclaimed!

His very deliberate action of closing the scroll and returning it to the attendant sends the clear message that he has yet to “proclaim the day of vengeance of our God.” But it is coming….

Isaiah wrote this prophecy from a perspective that was about 700 years before Christ’s first coming. Yet every single detail that Isaiah prophesied concerning that event has been fulfilled.

It’s a stark warning to you and I, that if Jesus were to fulfill hundreds of prophecies, which he did, and historical records support this, then he will return to complete the additional prophecies…quite literally.

You and I have the advantage of reading Isaiah 2,000 years after Christ’s birth. When Isaiah recorded these prophecies, he didn’t have any reference of time between the two advents.

What God wrote through the prophet so long ago, is a separation of “the year of the Lord’s favor” (first Advent) from “the day of vengeance” (second Advent) with the small, insignificant word “and” declaring two events through the one person of Jesus.

His birth—His first arrival—brought God to earth, and began a series of events between Heaven and earth that will culminate in our eternal salvation being secured forever.

Remember “Jesus is the reason for the season!”

DOUBLE YOUR IMPACT! Any monetary gift given in December and before the end of the year, in support of Dale Black Ministries, will have double the impact! Each dollar given in December to the end of 2022, is pledged to be matched. It’s the Double Impact Year-end Gift Challenge!

Every person is precious to God and that also means YOU. Let’s join together to reach more. Please prayerfully give today to help us reach more souls for God’s kingdom. Thank you!

.Not sure you’re going to HEAVEN?
Then click on the following video link:
“Jesus said, You Must Be Born Again.”

PRE-ORDER YOUR COPY NOW of “Visiting Heaven: Heavenly Keys to Living a Life Without Limitations” by Capt. Dale Black, on Amazon.com.

BIG CHRISTMAS SALE HAPPENING! 67% Discount on some items. Check out our sponsor MY PATRIOT SUPPLY, to purchase stored food supplies and other survival preparedness items. Every purchase helps support DBM as they give back a percentage of your purchase to the ministry. Click the following link to receive discounted pricing while supporting DBM: MY PATRIOT SUPPLY

What Others are Saying:
“What a great idea, standing on the side of the road, giving life-giving words, which is exactly what people are desperate for. The words of Life, Jesus!! In Spirit and in Truth!! A hug and prayer brings much comfort and warmth. I pray supernatural warmth for you all, to sustain the cold and that many are brought to faith in the Lord, surrendering to His will in their life!” – Ruth, U.K.
“A wonderful message that is desperately needed today (Understanding the Day of the Lord). We fight against not only the evil forces at work in this world but also against false prophets within the church who have been deceived by Satan and their own lust for power and greed. I am honored to be a partner with you.” Jacques L.
“Powerful truth and teaching (The High Cost of Deception). Thank you Paula.” Sharon P.
“Thank you so much for sharing the Word. And giving insight on who we are in battle with (How to Defeat Evil).” – Stephen J.
“Thank you fellow disciples of Jesus, captain Dale, Paula and Kara for all your devotion and teachings this year. May Jesus bless your Christmas this year with His mighty presence and a new ENCOUNTER with Him. Love the photo with the banner in the snow :-))” Blessings. Gawie & Wilma – So. Africa