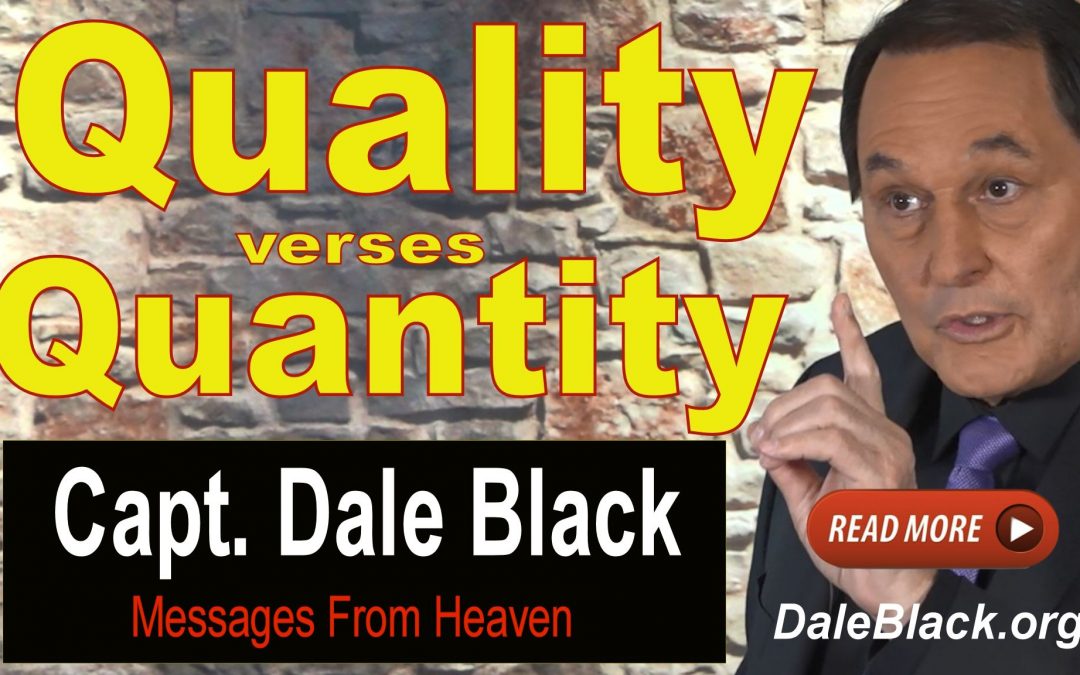 To this day my mother still laughs at a phrase I was known for saying as a teenager. At the dinner table I was often asked, “Are you enjoying your supper?” I responded with, “It’s quantity, not quality, that matters.” We still laugh at this saying. As a growing teen the quality of the food paled in comparison to the quantity.
.
On a serious note, God has much to say about the value of: Quality versus Quantity. Let’s look at how God views these often opposing nouns in scripture.
.
Let’s start with the foundational truth found in Isaiah 55:8-9, which tells us about God. “’For my thoughts are not your thoughts, neither are your ways my ways,’ says the Lord. ‘As the heavens are higher than the earth, so are my ways higher than your ways and my thoughts than your thoughts.’
.
This scripture reminds us of an unchangeable truth. God and people don’t think alike. And God never changes and is never wrong in His thinking. Whereas mankind, who live in Satan’s kingdom, live in a brain-washed and deceptive world that is out to steal, kill and destroy. Therefore, people struggle to think in a way that is godly and contrary to the world around us.

“And do not be conformed to this world, but be transformed by the renewing of your mind, that you may prove what is that good and acceptable and perfect will of God” Romans 12:2.

There is a reason we are told as believers to renew our minds and keep them continually renewed. It is unnatural for us to think like God thinks. It’s an ongoing challenge that we must win if we are to be overcomers. One way to know if you’ve succeeded or not is to ask 10 people around you for their opinion on a subject. And the opinion that is in agreement with God, will generally be the minority opinion, if you hear it at all. Just the opposite of the way most think–that the majority must know what’s right.

Let’s look at a fascinating example from the Bible—the story of Gideon. In judges 6-8 we learn about Israel and the judgement God had declared against them due to their sin and idolatry. The Midianites were invading and stealing their harvest and provisions each year leaving the Israelites with very little food. Sounds like what’s beginning to happen today, doesn’t it?

We see Gideon, as a young man, secretly threshing wheat in a winepress, trying to keep it away from the Midianites and provide food for his people. That’s when an Angel of the Lord showed up and spoke to Gideon, saying, “The Lord is with you, you mighty man of valor” (Judges 6:11-12). Gideon saw himself differently than God did. Gideon’s self-image was that of a young, weak and ineffective person, while God saw him as a mighty man of valor.

So often this contrast in self-image occurs in people of God who have not renewed their minds about how God sees in them. People of God often tend to look at themselves through their outside circumstances, or by listening to other people’s opinions, or by how they feel emotionally… more than according to God’s Word. God always looks at the heart of a person to evaluate their inner man.

We must remember that when we are born-again, we are a new creature in Christ. God has given us a new spirit on the inside that is a reflection of Jesus. We are called to take the following scripture to heart. “You are of God, little children, and have overcome them, because He who is in you is greater than he who is in the world.” 1 John 4:4.

Daily we must choose to pick up our cross and die again to self, in order to follow Jesus. If we don’t, our old man creeps back up on the throne to reign, in spite of the gift we have been given for a new life. To be a disciples of Jesus… to be pleasing to God… we MUST renew our opinion of who we see when we look in the mirror each day.

Back to Gideon’s story…. Gideon choose to believe God and to obey what God ask him to do, even though it sounded impossible. His willingness to walk in faith and obedience proved what God believed about him was true.

This reminds me again of Romans 12:2. The reason that we renew our minds to think like Christ is so that “…that you may prove what is that good and acceptable and perfect will of God” Romans 12:2.

God’s will must always be accomplished through His people. The people who trust in the Lord are God’s access points into Satan’s kingdom. God will not go around the people to do what He wants to do—but through them and do what His people allow Him to do.

So Gideon saw that the Midianites had 135,000 men. And Gideon could only rally 32,000. A deficient amount by a ratio of more than 4 to 1. Gideon was thinking… “I need more men!” And God said, You have too many (Judges 7:2). What a classic example of God and man’s thoughts being opposite. Gideon was looking at the numbers (circumstances). While God was looking at the hearts to show Himself strong in Gideon’s and  Israel’s behalf.

God instructed Gideon to send away all those who were fearful and afraid. This reveals what God thinks about fear. He can’t use a person who is fearful because it reveals that they are not trusting in Him. But that one requirement caused 22,000 men to leave. Now Gideon only had 10,000 men left. This was now a ratio of 13 to 1. Things seemed to be getting worse, not better, from Gideon’s perspective. But he was having to choose to trust in the Lord. Something God always requires for victory.

To Gideon’s great surprise, God said, “The people are still too many” (verse 4). And God told Gideon how to test the remaining men. (See Judges 7:4-7).

This test, which came from God, caused one particular trait to be revealed. If the man had it, he stayed. If the man did not have this very important trait, he was sent home. God knew what was needed to win. He didn’t need numbers. He needed men with faith, not fear. And men with this one other character trait.

Gideon took the men to the water to drink. And those men who put down their shield and their sword to drink were disqualified. Those who drank like a dog while remaining vigilant were acceptable to the Lord. This left 300 men remaining with Gideon—a ratio of 450 to 1! Impossible?

With these 300 men Gideon planned a surprise attack and put the Midianites on the run. After this turn in the battle many other men joined in to help to chase the fleeing enemy.

This Biblical account of Gideon is a powerful example of the difference between God’s ways and man’s ways. For God, the question is not “how many people” but “what kind of people.”

This once again reveals how vital it is to trust in the Lord and let Him lead us to victory. When you look in the mirror, who do you see? Someone who is vigilant? Someone full of faith? If not, begin today renewing your mind and building your faith to be looked upon as a mighty person of valor by God. There is much as stake and the battle is heating up.

“Be sober, be vigilant; because your adversary the devil walks about like a roaring lion, seeking whom he may devour.” 1 Peter 5:8.

Always remember, With God nothing is impossible!

JOIN THE  FAITHFUL REMNANT:
If you are ready to be part of The Faithful Remnant during these chaotic days, join with other faithful followers of Jesus who have pledged not to compromise. Go to DaleBlack.org and give any amount at the GIVING page toward Faithful Remnant Church-tithes and offerings. Any amount will automatically enroll you and keep you up to date with videos and newsletter specifically for The FAITHFUL REMNANT Church. God has quickened our hearts to minister to His faithful church and prepare His people to understand and face the days ahead.

What Others are Saying:
“Paul and Dale Black and not like other pastors; they tell it like it is and do not soften the message like most pastors do.” Bru
“Wow!! This came at the perfect time, just what I needed. Christine
“Dale, thank you so much for your teaching. Thirty years ago I set aside the ingrained pre-trib teaching after searching scripture for the truth. What I found aliegns nearly perfectly with your end-times timeline. I’m now convinced most Christians are so deluded in thinking we will be removed beforehand that when it becomes obvious the Great Tribulation is upon us, they will fall away.” David
“Excellent advice on Bible study time. This structure is so much needed in the life of believers now a days. I believe many will benefit from it. God bless you brother Dale.” Sophie