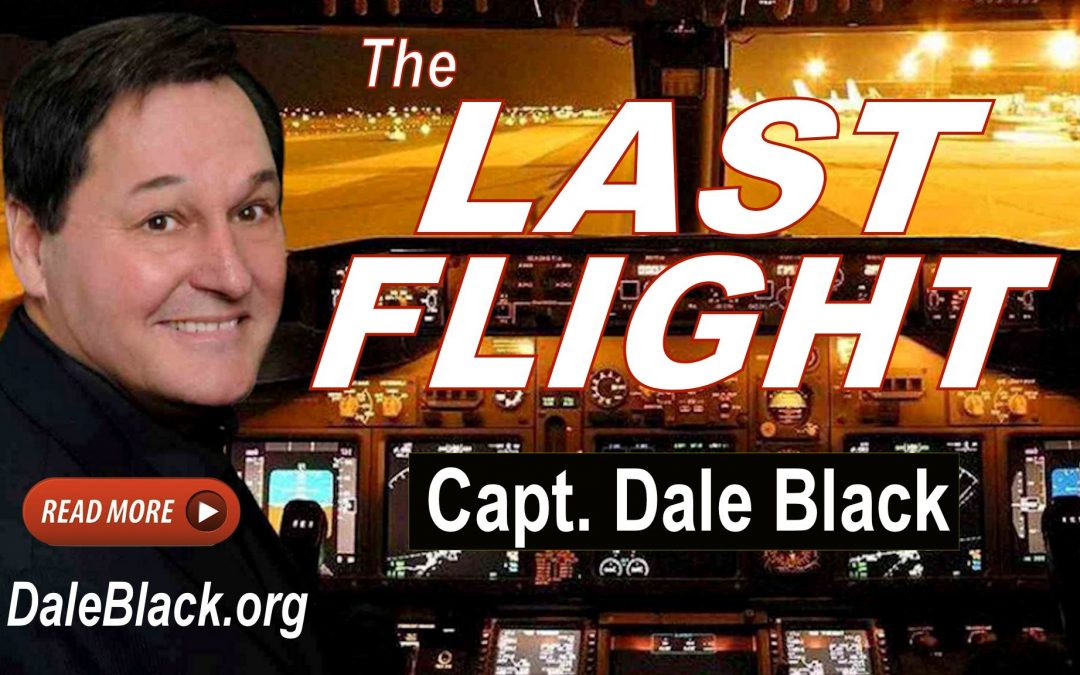 Today’s message is an excerpt of Dale’s NEW book, soon to be released about his journey to heaven following a fatal airplane crash and the extraordinary life that he lived in response to that experience:

It was an especially gorgeous night to fly. Clear skies, cool temperatures, and visibility in excess of fifty miles. After departing Omaha, Nebraska, in the Boeing 727 narrow body tri-jet with 139 passengers plus a crew of six, we were on schedule toward Los Angeles International Airport (LAX). This was the last leg of a four-day trip.

To me, being part of the flight crew of a major U.S. airline was nothing short of a miracle. Not only that, but TWA, the airline of my dreams. You see, more than ten years earlier I had been a passenger and the only survivor of a horrific and ironic airplane crash that the National Transportation Safety Board had declared “non-survivable.”

At the scene of the crash site, paramedics had resuscitated my lifeless body—at least temporarily. Once at the hospital I remained in a coma for three days. During this time, I visited heaven. On the morning of the fourth day, I awoke forever changed with a profound understanding of things I had never learned on earth. There was also an unmistakable call of God on my life. How could I go back to living a “normal” life with all that had occurred?

Sitting in the cockpit, I remembered that traumatic event and the aftermath. My injuries were so massive, the medical team was clear—I would never fly again. That’s because I’d never walk again or use my left arm or see from my right eye. And those were just a few of my injuries. Yet after a decade of rehabilitation and retraining, here I was, flying for Trans World Airlines. That was indeed miraculous!

While still flying for the airlines, I ran my own aviation business. Along with my wife, Paula, I had started a jet pilot training, jet charter, and jet sales corporation in Southern California. Our clients were Hollywood film producers, movie stars, politicians, well known musicians, and large company CEOs. God abundantly blessed us through our business.

At the same time, Paula and I were raising two growing kids and volunteering as youth ministers at church. We were more than busy, but our lives were entirely fulfilling.

As an offering to the Lord for all He had done to restore my life, Paula and I donated flight services, aircraft, and our time and energy to ministry outreach and various humanitarian needs. With God’s help, we provided medical and dental support, food, and clothing, as well as Bibles and gospel tracts to the needy in many countries. God also made a way for us to build several churches and an orphanage.

A special highlight was spending two summers ministering to the Aguaruna tribe in the jungles of northern Peru alongside medical missionary Dr. Larry Garman. There God had us build a medical clinic, and we helped provided spiritual and nutritional training to the indigenous people. Most importantly, the simple gospel message of Jesus was shared anywhere and everywhere.

Whatever God blessed us with, we were honored to use to bless others. As a result, millions heard the gospel message and tens of thousands became followers of Jesus Christ.

Someone in the cabin crew was requesting access with the secret knock that flight crew use to let those in the cockpit know it’s “friendly.” Swinging the door open, I went back to my duties.

“Hello, gentlemen.” Suzanne, the head flight attendant was checking in. “Captain, we’re about to begin meal service. Any turbulence or cautions I should know about?”

After receiving the update, Suzanne turned to leave the cockpit, slowing just enough to slap me on the shoulder and playfully push the back of my head as she walked out the door. You see, she and I had grown up together. We had been dear friends since the sixth grade and we both graduated from Western High School in Anaheim, California. Strangely, we both found ourselves working for Howard Hughes’s pet company—Trans World Airlines.

I loved this job—not only for the challenge of flying 209,000 pounds of machinery at over 500 mph through thin air but also for the comradery of a company of employees striving for aviation excellence.

Ahead and slightly to our right, the brilliant and stunning lights of Las Vegas, Nevada, became visible. Especially on a clear night, there’s nothing quite like those lights. From a high altitude, the city, which is surrounded by a desert of black nothingness, appears as an oasis. Millions of bright and colorful lights are compressed into a concentrated area forming a colorfully lit city in its center.

Astronauts on the International Space Station (ISS) observe and photograph numerous metropolitan areas over the planet. The Vegas Strip, with its brightly lit hotels and casinos, is reputed to be the brightest concentration of light on earth.

Again, my mind wandered back to my visit to heaven. The lights of Las Vegas pale in comparison with the unimaginable beauty of the light there. Heaven’s light comes from a singular source, yet the entire city is bathed in a whiteness that is more intense than the sun but doesn’t hurt a person’s eyes when gazing into it. Every color ever created exists in heaven’s dazzling light. As wonderful as the beauties of earth are, they are at best a weak imitation of the majesty of heaven. That eternal image is forever embedded in my heart and mind.

Flying level at 34,000 feet, we passed Las Vegas and reduced our speed to 460 mph as we began a gradual descent into LAX. I scanned the dials and adjusted the overhead rheostat light used to illuminate the approach descent checklist.

Suddenly, from just behind my head, I heard quiet yet powerful words: “Dale, this is your last flight.”
The voice startled me. I knew I had locked the cockpit door! I quickly turned my head to see who was behind me. No one was there. I glanced toward the other pilots as the possible source, but they were busily preparing for approach and landing. Besides, they were in front of me, not behind me.

Who had said that? I reached over to feel the door latch with my fingers, verifying the door was indeed closed and locked. My mind was spinning. Cupping my hand around my mouth, I whispered, “God . . . was that you?” I waited, listening intently. Nothing.

Struggling to concentrate, I forced my attention back to the descending aircraft. As I was setting the pressurization controls for the destination airport, there it was again.

“Dale, this is your last flight . . . for TWA.” That same voice! Just behind me. I spun around. Again, no one was there.

Now there was no doubt who had spoken. It was the familiar still, small voice of God. He had spoken to my heart. However, this time I heard every word so distinctly it was as if I were hearing with both my ears and my heart.

I was reminded of Samuel in the Bible when God spoke to him as a young man. Samuel thought a person was calling him until he realized it was God. That night in the Boeing 727 was just such an occasion.

My thoughts raced, trying to evaluate what was happening. Why would God say those words? He had miraculously restored everything I had lost in the crash. It was a testimony of God’s power and my faith that I was flying for one of the world’s premier airlines after all the injuries and rehabilitation I had been through.

Why would He say this was my last flight for TWA? That’s crazy. After answering my prayers and giving me my vocational dreams, why would He ask me to give them up? It made no sense.

What you have just read are some of the words that you’ll find in the new book called VISITING HEAVEN — Heavenly Keys to Living a Life Without Limitations. The new book will contain part 1 of the old book by the same name, and part 2. This is being published by Destiny Imagine Publishers and will be available before Christmas and placed in the DBM Store as soon as it is available. We wish to thank Marianne and a few others for helping get The Visiting Heaven project completed.

This new book picks up after the Flight To Heaven story. The book is dedicated to Pastor Bob Joyce and the forward is by Randy Kay. Please pray that God will be glorified and many will be inspired to live a life that reflects heaven without the limits in this fallen world.

.Not sure you’re going to HEAVEN? Then click on the following video link: “Jesus said, You Must Be Born Again.”

Check out our sponsor MY PATRIOT SUPPLY, to purchase stored food supplies and other preparedness items. Click the following link to receive discounted pricing:MY PATRIOT SUPPLY

JOIN THE  FAITHFUL REMNANT:
If you are ready to be part of The Faithful Remnant during these chaotic days, join with other faithful followers of Jesus who have pledged not to compromise. Go to DaleBlack.org and give any amount at the GIVING page toward Faithful Remnant Church-tithes and offerings. Any amount will automatically enroll you and keep you up to date with videos and newsletter specifically for The FAITHFUL REMNANT Church. God has quickened our hearts to minister to His faithful church and prepare His people to understand and face the days ahead.

What Others are Saying:
“The world has become unaware that it is blind and naked because of the constant watered down version of GODS WORD that is taught on a daily basis. Thank you brother Dale for teaching the full concentrated powerful truth of GODS WORD!” Ron S.
“Excellent message brother Dale! Thank you for your courage to speak the truth of the Word! If only people would realize how foundational this teaching segment is… for living as overcomers and growing up to become recipients of His provision!!” Eric –
“Great message Paula! He’s given us everything we need to be triumphant, in Him.” Sharon
“POWERFUL and BEAUTIFUL testimony of GODS WORD in action! My spirit not only heard what you said but felt what you said. I agree with every word because it’s GODS TRUTH not mans. Thank you for showing us how to stand on GODS WORD!” Ron B.