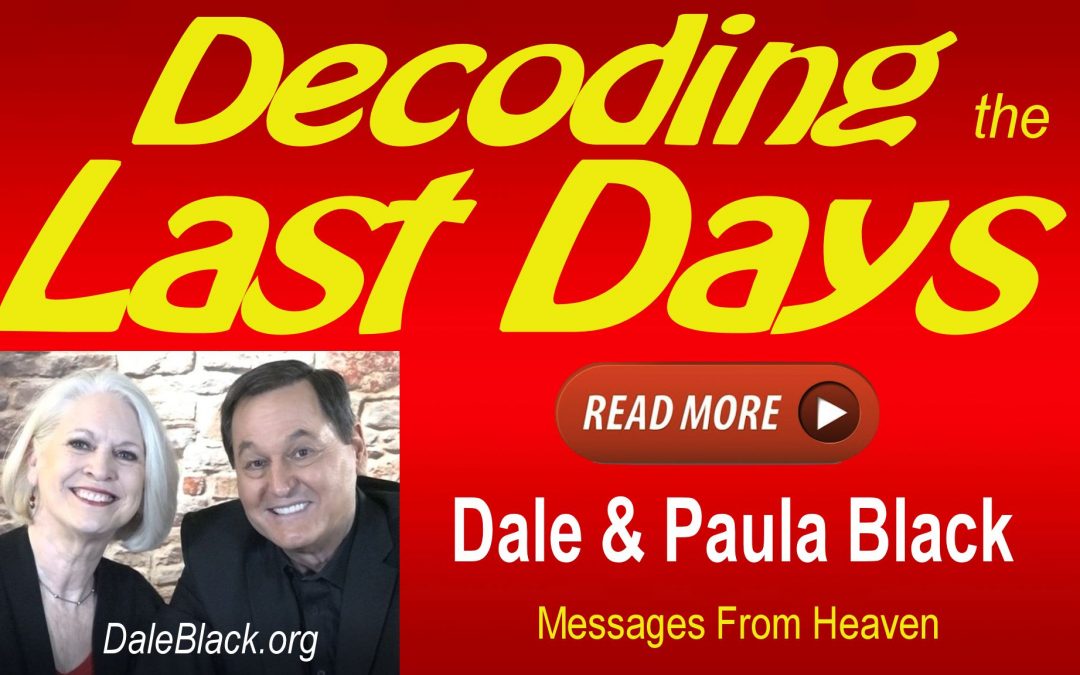 The year 2021 has brought major world changes, and they have come FAST. Because of the times in which we now live, a better understanding of the events of the last days has become essential. Eschatology, the study of future things, is always on my mind. The Bible gives us a wealth of knowledge about what we can expect in the last generation… at the end of this current age. Even as we arrive nearer to the final years, the markers become more plentiful and more impactful on our lives.

As a professional jet pilot, one of the most essential principles to flying safely is to always think ahead of the aircraft. This means that a safe and competent pilot is always mentally ahead, or thinking about the future of where the plane will be rather than where it currently is. The faster the aircraft… the more obvious the need is to the trained instructor to discern if the pilot is thinking ahead or behind the plane.

It is not necessary for me to elaborate further on this piloting principle, but know that while it is a critical factor for safe flying, I think it strangely relates to end-time events as well. I mention this because it is apparent to me now that this method of thinking—drilled in by years of training in the field of aviation— causes one who desires to know future events to be better prepared to deal effectively with the days ahead. It also inclines one to strive to understand what is coming.

Frankly, I have been told by many that I lead with my heart. That may be true… and I hope that it is. Yet at the same time, God has given me a very logical and literal mind to go along with the sensitive heart. These two parts of me—my spirit and my mind—often struggle to remain in agreement, but also give  the ability to better perceive what lies ahead, especially for the body of Jesus Christ.

Let’s take a few moments to look at the last book in the New Testament—the book of Revelation. It is unique from all others in its presentation and also carries with it a warning and a blessing. This book’s entire purpose is to reveal Jesus Christ to the world. And much of this revealing has to do with His return as King of kings and Lord of lords—something all Christians long for. The Revelation of Jesus Christ also reveals Him as the Lamb and the ultimate Judge of all creation.

For an overview, and possibly to simplify what is contained in the Book of Revelation, the first five chapters deal primarily with warnings to seven churches. These letters were not only sent to seven churches of John’s day, but the content is also prophetic and pertinent to the last days churches of the final generation.

In the following chapters—six to nineteen—we learn about seven seals that will be opened sequentially throughout the final seven years. Each seal contains an event of consequence which will ultimately bring about the end of the age. The final and seventh seal releases seven trumpet judgements and the seventh trumpet judgement releases seven bowl judgements, bringing God’s judgement on the world to a close.

The Apostle John is being shown this series of events from heaven’s perspective. He sees the scroll with seven seals. At first, no one is found worthy to open the scroll until the Lamb (Jesus Christ) appears. Only He (the Lamb) is worthy to break the seals to reveal what is contained on the Scroll. With the breaking of each seal something significant occurs upon the earth.

The first four seals are the infamous Four Horsemen of the Apocalypse, which you have likely heard about—even if through movies and books. Each of the horsemen represents a different facet of the apocalypse: conquest, war, famine, and death.

First, Second and Third Seals
The first horseman of conquest, riding upon a white horse, is a world leader (Antichrist incognito) who is given a crown, representing leadership, and speaks of peace (Revelation 6:1-2). The second horseman holding a large sword, is riding a fiery red horse and will cause war to break out on the earth (Revelation 6:3-4). The third horseman, riding a black horse is called famine and is described as holding a pair of scales in his hand. John hears a voice say that people will have to work all day to earn a little food (Revelation 6:5-6). This horseman would represent hyper-inflation and not enough food.

The first three seals are opened in the first half of the final seven years, while the fourth through the seventh seals occur in the second half of the last seven years and occur more closely together.

Fourth, Fifth, Sixth and Seventh Seals
These final four seals will complete the duration of God’s judgment, while they become more severe and more complex as they progress.

The Bible describes the fourth seal as a horseman named Death, riding a pale horse—and Hades (the place of the dead)—was following close behind him (Revelation 6:7-8). The fifth seal reveals martyrdom, referring to the many believers who will be martyred for their faith in Christ (Revelation 6:9-11).

The sixth seal unleashes a devastating earthquake which causes massive upheaval and devastation. In addition, there will be unusual cosmic phenomena when the sun turns black, the moon turns blood-red, and the heavens recede like a scroll (Revelation 6:12-14).

Following the sixth seal, but prior to the seventh seal, John describes an event that takes place: 144,000 Jews are marked on their foreheads by God and designated to be protected during the completion of the tribulation period (Revelation 7:1-8).

The final and seventh seal then begins with silence in heaven for about half an hour in solemn respect for what is coming next (Revelation 8:1). Contained within the seventh seal are the next series of judgements referred to as “seven trumpet judgements” (Revelation 8:2).

Seven Trumpet Judgements
Seven angels are each handed a trumpet which they prepare to blow (Revelation 8:2). Just prior to the sounding of these trumpets, an eighth angel takes a censer and burns “much incense” in it, representing the prayers of God’s people (Revelation 8:3–4). This eighth angel then takes the same censer and throws it to the earth (Revelation 8:5). Now the seven angels sound their trumpets one after another, causing great destruction on the earth.

Following the fourth trumpet but prior to the fifth, a great eagle flies above the earth saying, “Woe! Woe! Woe! to the inhabitants of the earth because of the trumpet blasts about to be sounded by the other three angels” (Revelation 8:11). For this reason, the fifth, sixth, and seventh trumpets are also referred to as the “three woes.”

When the fifth trumpet sounded, a plague of “demonic locusts” were released upon the earth that attack and tortured the unsaved peoples for five months. This is the only judgement that designates a specific timeline with it (Revelation 9:1-11). The sixth trumpet judgement releases four fallen angels who had been bound for this specific time. These angels, who rebelled with Lucifer, would proceed to kill one-third of all mankind (Revelation 9:13-17).

As followers of Jesus, we must read and study ALL of God’s word. The Lord has given us these details of the final days for a purpose. If it was not important for us to know, God would not have revealed it.

“My people are destroyed for lack of knowledge.” Hosea 4:6 reminds us that when we don’t understand God and His ways, we are vulnerable to destruction. Understanding this sequence of events will assist all who are alive during this critical time to identify their enemy (Antichrist) and to be better prepared to face what is ahead. Many believe we will not have to go through ANY of these things. But what if we do… we need to be prepared either way!

Whatever happens in the near future—a change in the money system, the eventual debunking of the fraudulent U.S. election of 2020, or the closing or reopening of churches—remember, God is still in control and we are following His plan right to the end. Let us keep our eyes on God and His Word. Let us unite together in love and fellowship and push back the forces that strive to divide us. Let us be the salt and the light in this world for as long as God gives us breath.

That’s all for today. If this article is helpful to you, it would help greatly to comment below and let me know if more writing like the above is something you would like to read more about.

What Others Are Saying:
“Just found you on Rumble! Loving what you guys are doing! Thank you!” Bisha
“You both are truly blessed by God and it is amazing the way you care and reach out to others for the love of Christ. In my 72 years I’ve never been so blessed by any other ministry. JoRena
“God bless you in Jesus’ mighty Name! I love you so much. What beautiful lives of service to our glorious God and soon-coming King.” Cynthia – Tennessee
“My wife and I are so enriched by the excellent teaching from you both. In the light of what Jesus taught, His investment in you is giving a hundred-fold return. I know He is pleased with your labours! Eric & Bonnie – Canada
“Captain Dale and Miss Paula – Dynamic Duo!!! We love you guys so much! Your ministry is so unique in that it speaks to the common person’s heart and the ordinary becomes extraordinary. You two are so “down to earth” and yet your messages are obviously not of this earth.” Frank & Leslie – Washington

Would you like to partner with Dale & Paula? You can be part of sharing the gospel of Jesus to save, heal and deliver worldwide. Learn Benefits of Partnership.

*If you would like to DONATE to help the gospel go forward, you can give ONLINE or by MAIL. To give online, click on the DONATE button above. If you prefer to give with Check or Money Order, please make your donation payable to: Dale Black Ministries (DBM) *  P.O. Box 2841, Hayden, ID 83835.

To make a donation or place an order by phone, call: 951-526-2101 and leave a message. Someone from our volunteer staff will call you back. Thank you very much, and may God’s blessings be upon you and your family.